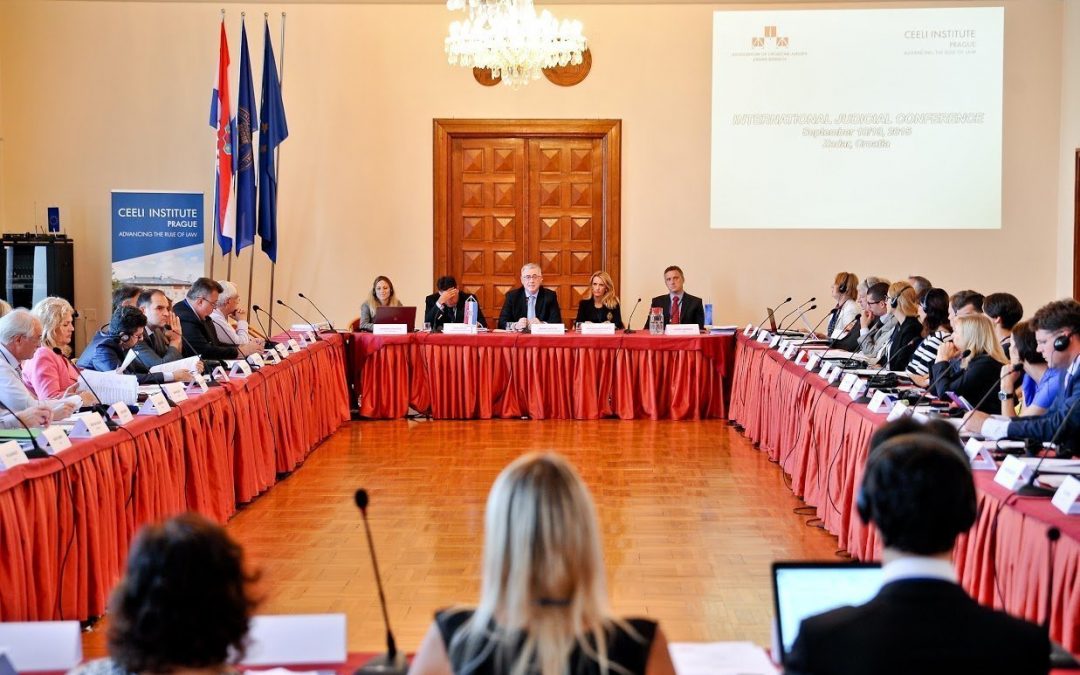 On September 18-19 2015 the International Judicial Conference co-organized by the CEELI Institute and Association of Croatian Judges (ACJ), Zadar Brunch took place in Zadar, Croatia. The conference addressed the topics of evaluation of judges, judicial ethics and effectiveness of the European Convention on Human Rights. Participants included 50 judges from Croatia and throughout the Western, Central and Eastern Europe.

Judge Branko Hrvatin, President of the Supreme Court of the Republic of Croatia opened the conference along with Justice Duro Sessa from the Supreme Court of the Republic of Croatia and the president of the ACJ, Judge Jadranka Nižic-Peroš, President of Association of Croatian Judges, Zadar Branch and Barbora Jungová, the CEELI Institute representative. The first session addresses the topic of Evaluation Judges. The session was moderated by Justice Duro Sessa, Judge Marianne de Rooij and Judge Karina de Koning both from the Netherlands and Judge Levente Simon from Hungary. The moderators shared their experiences about the methods of assessment of the judges ‘work. They debated the questions on how to develop effective criteria and indicators to evaluate judges ‘work and how to find the right balance between qualitative and quantitative criteria in order to not interfere to judge’s independence.

During the next session on Judicial Ethic the moderators Judge Davor Dubravica from Croatia and Judge Lukasz Piebiak from Poland as basis for discussion presented findings from GRECO IV evaluation round of 29 countries regarding judicial ethics. The focus was given to system of ethical rules and conflict of interest including declaration of assets and its effective monitoring, examples of different approaches to accessory activities of judges, post-employment restrictions, supervision and disciplinary proceedings system and others. The presentations lead to fruitful discussion on implementation of Code of Judicial Ethics in the practice and legitimacy of imposing disciplinary measures in case of its violence. The participants agreed that appropriate training of the judicial members in ethical code is necessary.

The second day of Judicial Conference started with the presentation of the Manual on Independence, Impartiality and Integrity of Justice presented by Judge Cristi Danilet from Romania. The Manual which has been develop by judges participating in CEELI Judicial Network compiles thematically more than 130 international standards related to judiciary. It provides easy to use reference tool to facilitate day to day work of judges worldwide. You can find the Manual free of charge on the CEELI website.

“Effectiveness of the European Human Rights Convention” was the last topic discussed during the Judicial Conference in Zadar. Judicial aspects of the Convention were presented by Mr. Kresimir Kamber from European Court of Human rights and Judge Marijan Bitanga from Croatia. The discussion looked at the ECHR system from the perspective of a national judge, and examined issues such as whether national judges are sufficiently informed on the ECHR case-law developments; the complexity of questions related to the direct adjudication of human rights issues in national judicial practice; and the extent to which there is harmony of the “European constitutional order” in domestic contexts.

The extensive cost sharing for this conference has been organized with costs being split between the CEELI Institute (under INL grant support), Association of Croatian Judges, Zadar Branch, the Association of Croatian Judges – Central Office, the Embassy of the Kingdom of the Netherlands, the University of Zadar and the Zadar Provincial Government.